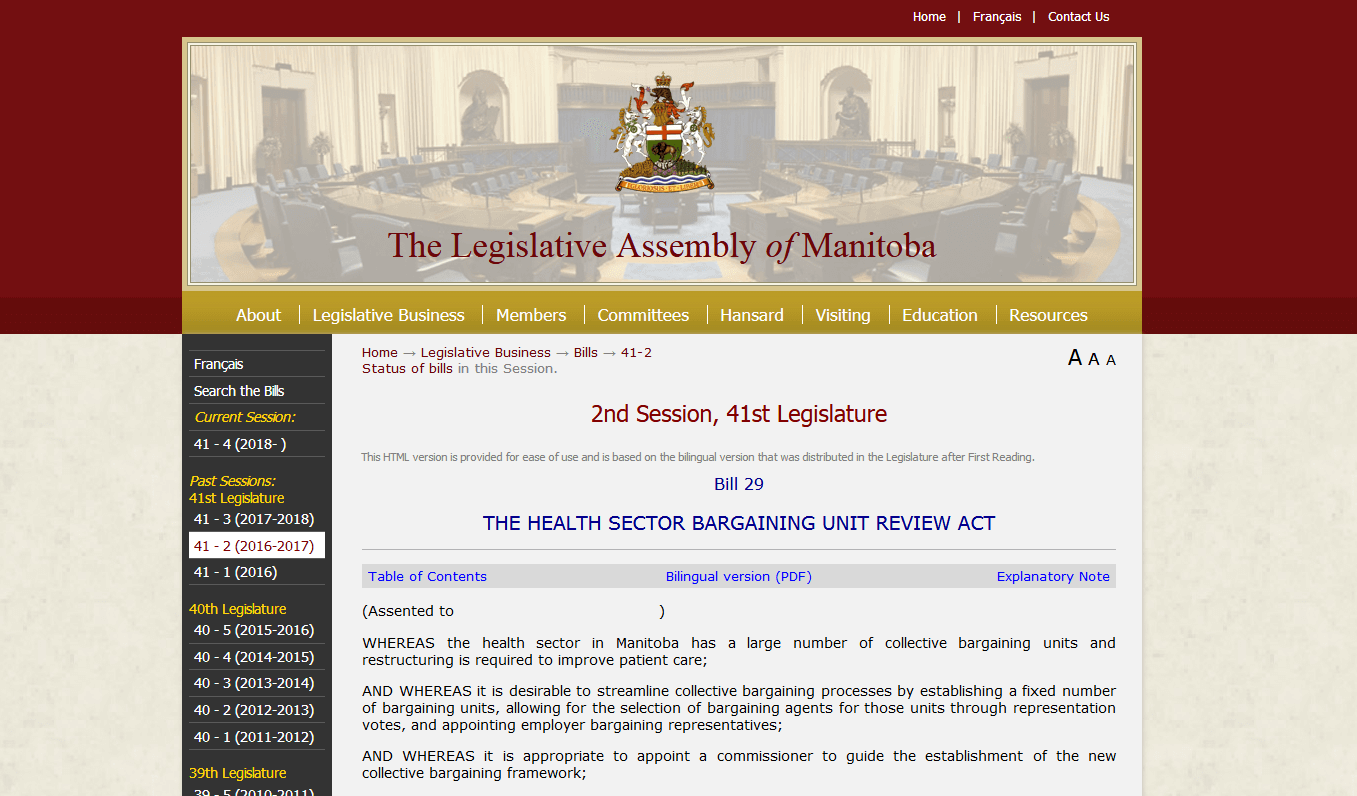 Link to the entire bill here:

Explanatory Note from the Manitoba Government:

This Bill deals with bargaining units and collective bargaining in Manitoba’s health sector.

The Bill establishes a fixed number of bargaining units for each health region and for each province-wide health employer such as CancerCare Manitoba and Diagnostic Services of Manitoba Inc.

A commissioner will be appointed to determine the composition of the bargaining units.

If a bargaining unit consists of employees represented by more than one union, the commissioner will conduct a representation vote of employees for the purpose of selecting a single bargaining agent.

The Bill also establishes an employers organization for each health region, for the sole purpose of collective bargaining. It requires the minister to appoint one or more representatives to bargain on behalf of those organizations and on behalf of the province-wide health employers.

The commissioner will have authority to make the decisions necessary to implement the new bargaining framework.

In previous comments to the media, Premier Pallister had indicated that it was too much for government to negotiate with so many bargaining units. In response, many unions, including MAHCP, clarified that they often bargain as larger groups. For example, MAHCP’s Central Table sees 17 bargaining units negotiating at one table – not 17 separate tables. This clarification seems to have fallen on deaf ears, as Pallister went full-steam ahead with Bill 29.

Bill 29 passed first, second and third reading, was given Royal Assent and then proclaimed on May 10, 2018.  When the Bill was proclaimed, it officially became named: The Health Sector Bargaining Unit Review Act.  It is now law in Manitoba.

The Pallister government appointed a commissioner, Robert Pruden, also in May of 2018 to oversee Bill 29’s expected 18-month implementation process.

MAHCP has been included in meetings with government officials and other unions that have members in health care to discuss the details of Bill 29.

However, many questions remain that MAHCP President Bob Moroz and Executive Director Lee Manning continue to seek responses to. Dates for the expected representation votes have not yet been decided, but should take place before the end of Commissioner Pruden’s 18-month implementation process. In essence, that means anytime in 2019

Communications from MAHCP, including newsletter: