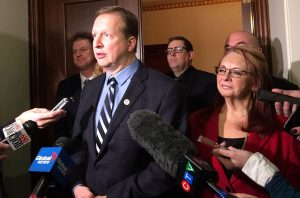 Today Manitoba’s largest public sector unions and the Manitoba Federation of Labour met with the Minister of Finance, at his request.

The meeting was the first of what we expect to be several face-to-face meetings. We are hopeful that future meetings will include the Premier and all of Manitoba’s public sector unions.

In the brief meeting, the Minister maintained the government’s focus on balancing the provincial budget and confirmed that as reported in the media, they are considering wage freezes, reopening contracts and restructuring bargaining units, but did not provide any additional information.

We reminded the Minister of the Premier’s commitment to respect collective bargaining and protect and improve the public services that all families count on while balancing the budget over a period of eight years.

Manitoba’s labour movement will continue to ask questions, seek clarification when needed and always meet with the province in good faith.